In connection with work for the Ethiopian Education Foundation, I’ve just spent a weekend on the Abu Dhabi campus of New York University. NYUAD have, in recent years, offered comprehensive scholarships to students from EEF and this year generously invited us (along with a group of US-based school careers counsellors) to observe the candidate selection process.

It was a pretty packed weekend schedule, sitting in on candidate selection events, joining sample classes and touring the campus facilities. But it gave me a great insight into an exciting concept in higher education, along with a fascinating glimpse of the city of Abu Dhabi.

Throughout, two themes kept re-surfacing, which together encapsulate the uniqueness of the NYUAD experience: ‘global perspective’ and ‘interdisciplinarity’.

NYUAD’s global perspective was in evidence right from the introductory, plenary session. Candidates had been asked to bring an object which provided insight into their definition of ‘home’.  We listened as 123 applicants, from a total of 46 different countries, used their object to provide a brief insight into their personal background.

Geographical diversity aside, the individual stories covered a vast spectrum, ranging from the kids who’d already had a degree of privilege and extensive international exposure (due, often, to parents’ careers), right through to those who had never left their home town. We heard from students who’d lost their homes in Afghanistan and Syria. A girl from Ethiopia brought as her ‘object’ one of the sanitary pads she and her friends make at school, to provide to her disadvantaged neighbours. And, perhaps most moving of all, was the young boy who explained he is officially stateless, temporarily granted a Jordanian passport but with no true ‘home’ (he brought his treasured paintbrush as his object).

What this diverse group of kids shared in common, though, was firstly an exceptional academic record (a given, to be considered for NYUAD), and secondly an intense curiosity about the world around them. It’s this passion for learning about other cultures, and their openness to the unfamiliar, which had attracted them to the uniquely global perspective that an NYUAD education aims to provide.

The second theme that recurred throughout the weekend, was what was referred to as ‘interdisciplinarity’. We listened to Deans from across the science, arts, engineering and social science faculties explain the critical interdependence between their particular specialisation, and those of their colleagues.

For example, how scientific techniques of x-ray technology are uncovering aspects of art history, how ideas in poetry and film are fundamental to scientists grappling with ethical questions posed by today’s medical capabilities, how economic challenges are being addressed through science and technology.

Thus NYUAD aims to be a true ‘liberal arts’ college, in the sense of that (apparently Roman) concept of an all-encompassing education across the intellectual spectrum, from arts to science to engineering, to ensure a truly rounded platform for future leadership. All students are obliged to complete a broad-ranging, holistic path during their four years.

As you’ll gather, the weekend left me with a very positive impression. Meeting the senior, graduating kids, I was hugely impressed at the passion with which these articulate, mature and truly globally aware, young people described the educational experience they’d had. A sentiment expressed by Dan, a final year student, stuck with me:

‘Before I came here, I used newspapers and books to build a theoretical understanding of other peoples’ perspectives. But having lived and studied alongside those from cultures that are completely different to my own, my understanding has moved to a whole new level. Now, I feel part of their story.’

To finish, a brief word on my limited experience of the city itself. I’ll admit that it’s never actually been high on my list to visit (I’d assumed it was sun, shopping and little else). But I found that it definitely has its attractions. The eye-wateringly rapid development appears to be creating a cosmopolitan, dynamic 21st century city. We toured the recently constructed ‘grand mosque’, with its white marble that glistens against the perfectly blue Abu Dhabi skies. We visited the Qasr Al Hosn annual cultural festival, had dinner in the desert under the stars, and I even managed to squeeze in a run along the beach on the very pleasant ‘corniche’. Perhaps most interesting, though, was an exhibition displaying the plans for the city over the next few years. They include a futuristic Gehry-designed Guggenheim, the world’s only other outpost of the Louvre, and a spectacular-looking Norman Foster-designed national museum. The aim is to create an artistic and cultural hub for the region, centred around Saadiyat Island.

Almost all EEF students will continue to attend the great universities within Ethiopia. But for the one or two for whom this type of course is suited, NYUAD is a fantastic opportunity (made possible by the generous NYUAD financial aid programme).  Indeed, I think if I were an 18yr old choosing an education today, I’d be giving NYUAD some serious thought myself.

Instead, I guess I’ll just have to settle for coming back for the Guggenheim and Louvre.

If you’d like to find out more about the Ethiopian Education Foundation, have a look on http://www.ethio-ed.org/ .  (We’re always looking for more sponsors !!) 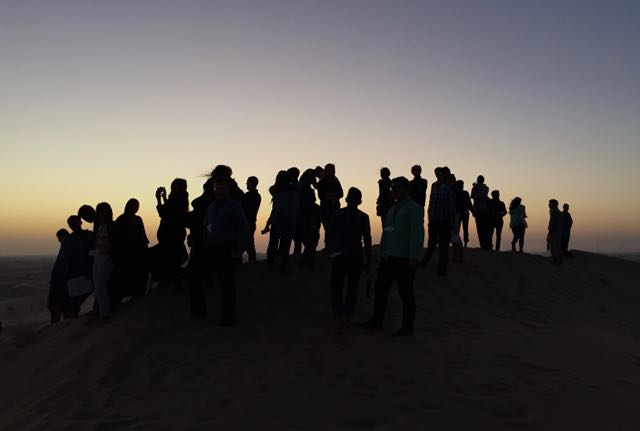